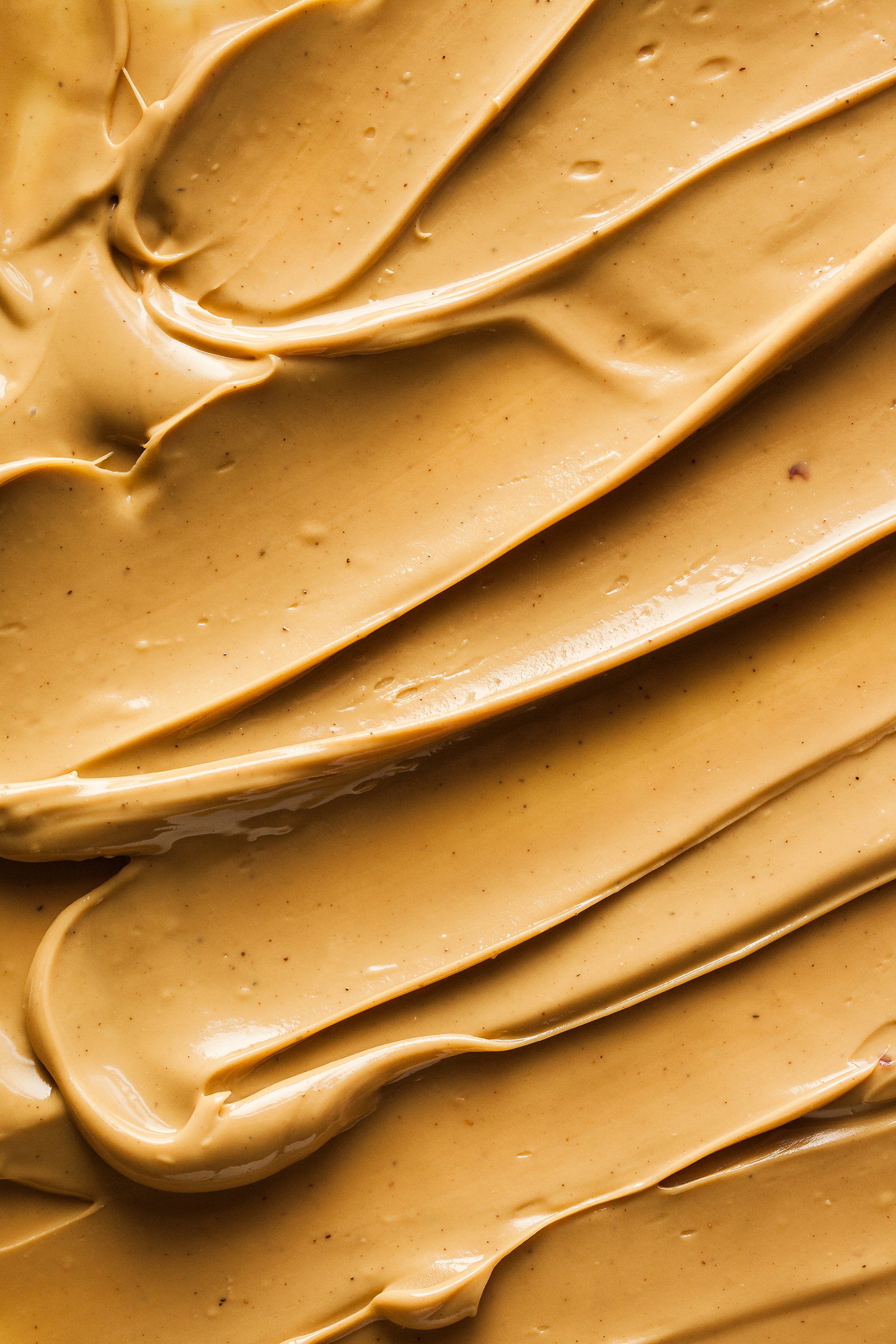 I don’t know about you, but this month has been less than fun (massive understatement). Finding solace in working in my kitchen every day has been a welcome distraction. I’m grateful for having a million things on my to-do list these past couple of weeks. When on Instagram, I’m continously impressed by the creative community’s ability to either find humor in the uncertainty, laughter in the frustration, and love in the face of hate. Never underestimate the power of community (whether it’s one that’s focused on inclusion or exclusion- it’s powerful). All these busy days have flown by and now it’s time for Thanksgiving. Not having much time lately for grand desserts, I’m taking it easy with these Caramelized White Chocolate Mediants with Espresso Crumble and Smoked Sea Salt. After the Eating Olympics 2016 (a.k.a. Thanksgiving dinner), there’s only going to be room for nibbling on chocolate right after. Pie a couple of hours later of course. 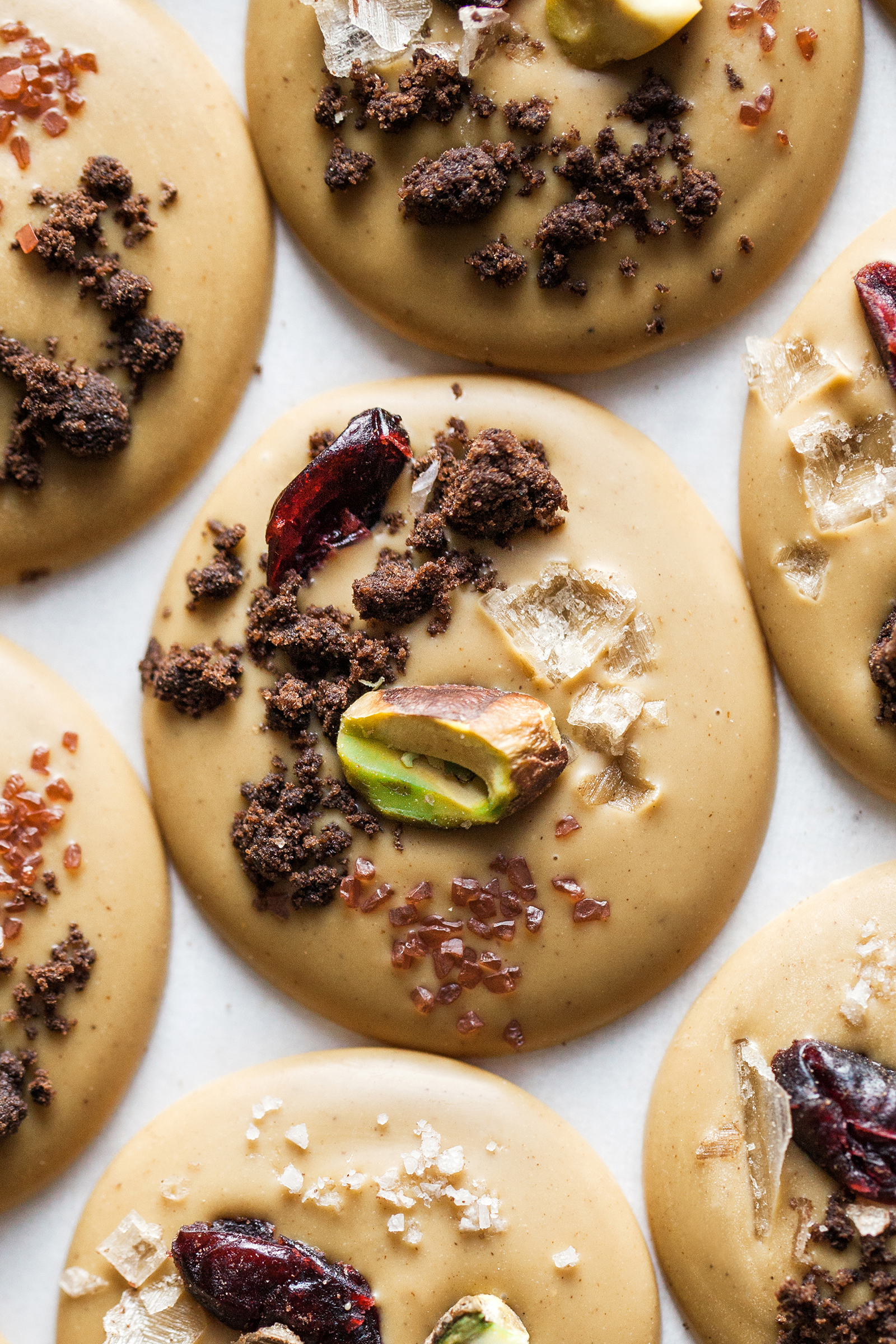 Traditionally, mediants are a French confection of chocolate discs that are studded with dried fruits and nuts. I threw on some chocolate espresso cookie-like crumbles because it adds another level of flavor and texture. These mediants are made with Valrhona’s dulcey caramelized white chocolate. It’s a blonde buttery chocolate with a slightly toasted flavor that pairs well with the spices and smoked sea salt. However, the beauty of mediants is that you can use whatever type of chocolate you like. Use dark, milk, or traditional white chocolate and top with any of your favorite nuts, dried fruits, salts, seeds, etc. Just use couverture (another name for ‘high quality’) chocolate since it’s the star of the show. Mediants make for excellent holiday gifts or party nibbles as well. 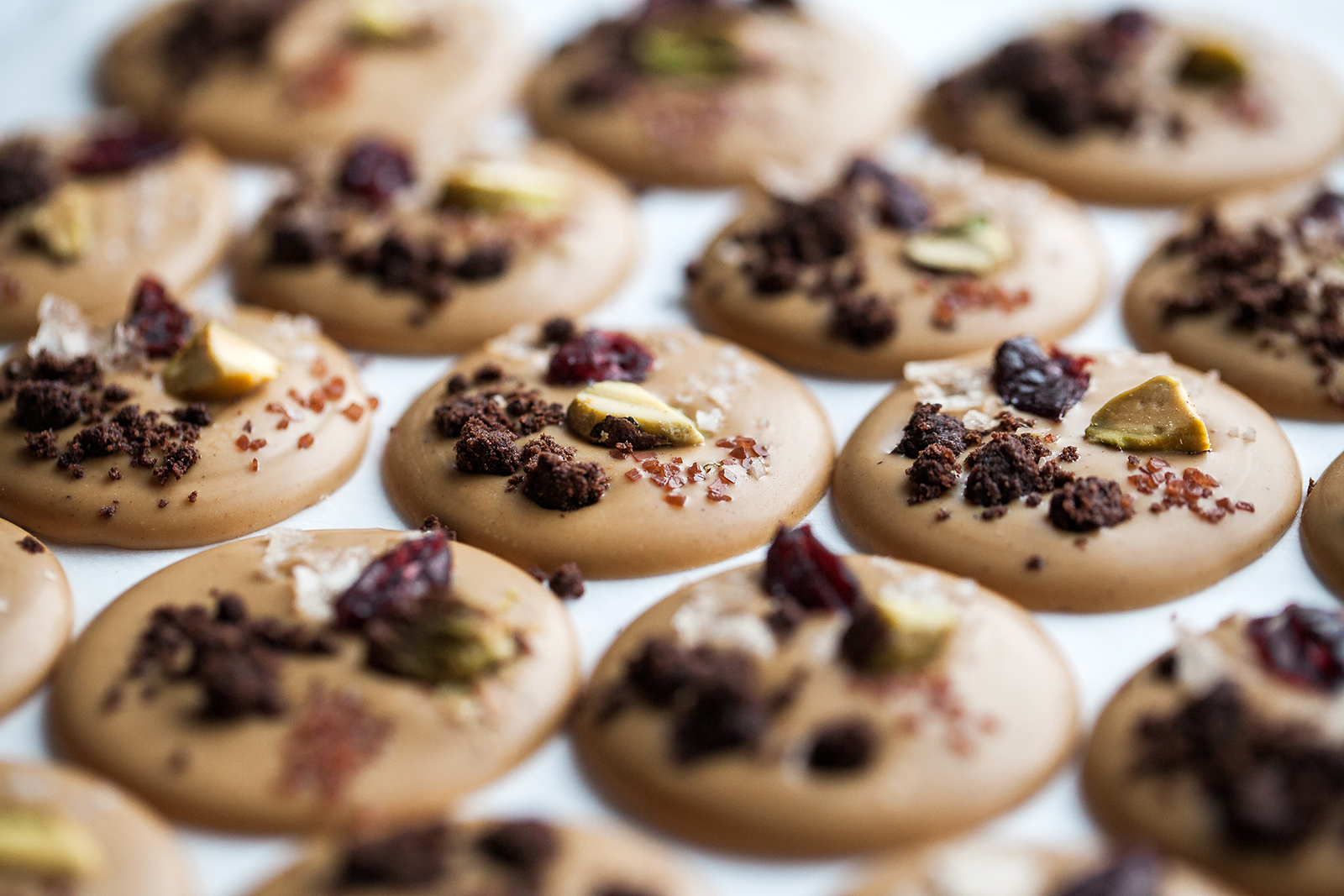 For this recipe, you’ll need to temper the white chocolate in order for it to set properly. Tempering is essential when making them as it’ll produce a smooth and glossy finish to the mediants. Tempering is just the process of heating and cooling chocolate to a specific temperature range in order for it to set with a firm ‘snap’ and not melt when touched. Scientifically, it has to do with melting out certain beta (fat) crystals and reintroducing new ones into the cocoa butter. Don’t let this info intimidate you though. You’re just melting chocolate and taking it’s temperature. I’ve provided a link, in the recipe, to a how-to tutorial from a previous post and also one from Ina Garten that will work well. All tempering requires is patience and a little babysitting while you work. Nothing to be afraid of. Also, feel free to use as much of the garnishes as you like or swap them out for different ones. The amounts are just  guidelines, so have fun and tailor it to your personal tastebuds. Enjoy and Happy Thanksgiving!

Preheat the oven to 300F (149C). Line a baking sheet with parchment paper or a Silpat.

In the bowl of a stand mixer, combine all ingredients except the butter. Add in melted butter. Mix, on low, until mixture combines and forms small clumps. Evenly spread out mixture onto the prepared baking sheet and bake for 20 minutes. Crumble will still be soft, but will harden once cooled.

Remove from oven and set on cooling rack. Once cooled, break up into smaller pieces if needed. Store leftover espresso crumble, in an airtight container, for up to 1 week or freeze for up to 1 month.

Line a large baking sheet with parchment paper or spread a large piece of parchment directly onto a clean countertop workspace.

In a heatproof bowl, temper dulcey white chocolate. Stir in cinnamon, ginger, and nutmeg. Pour some tempered chocolate into a disposable piping bag (this will produce perfectly round mediants) or you can leave the chocolate in it’s current bowl and use a spoon to shape mediants (this will produce free-formed mediants). When the chocolate bowl begins to firm up, simply return it to the double boiler for 10-20 seconds and continuously stir until remelted.

With scissors, snip a small tip off of the piping bag. Hold the piping bag at a 90-degree angle, over the prepared parchment, and squeeze out three to five 1 1/2-inch to 2-inch sized mounds. Alternately, use a spoon to dollop out mounds. Top each of the mounds with a dried cranberry, a pistachio piece, sprinkle of espresso crumble, and smoked and red sea salt. Continue piping chocolate mounds and topping with garnishes until all mediants are complete.

Allow mediants to set untouched, at room temperature, for 1-2 hours. Once set, transfer to an airtight container (in a single layer) and store for up to two weeks.